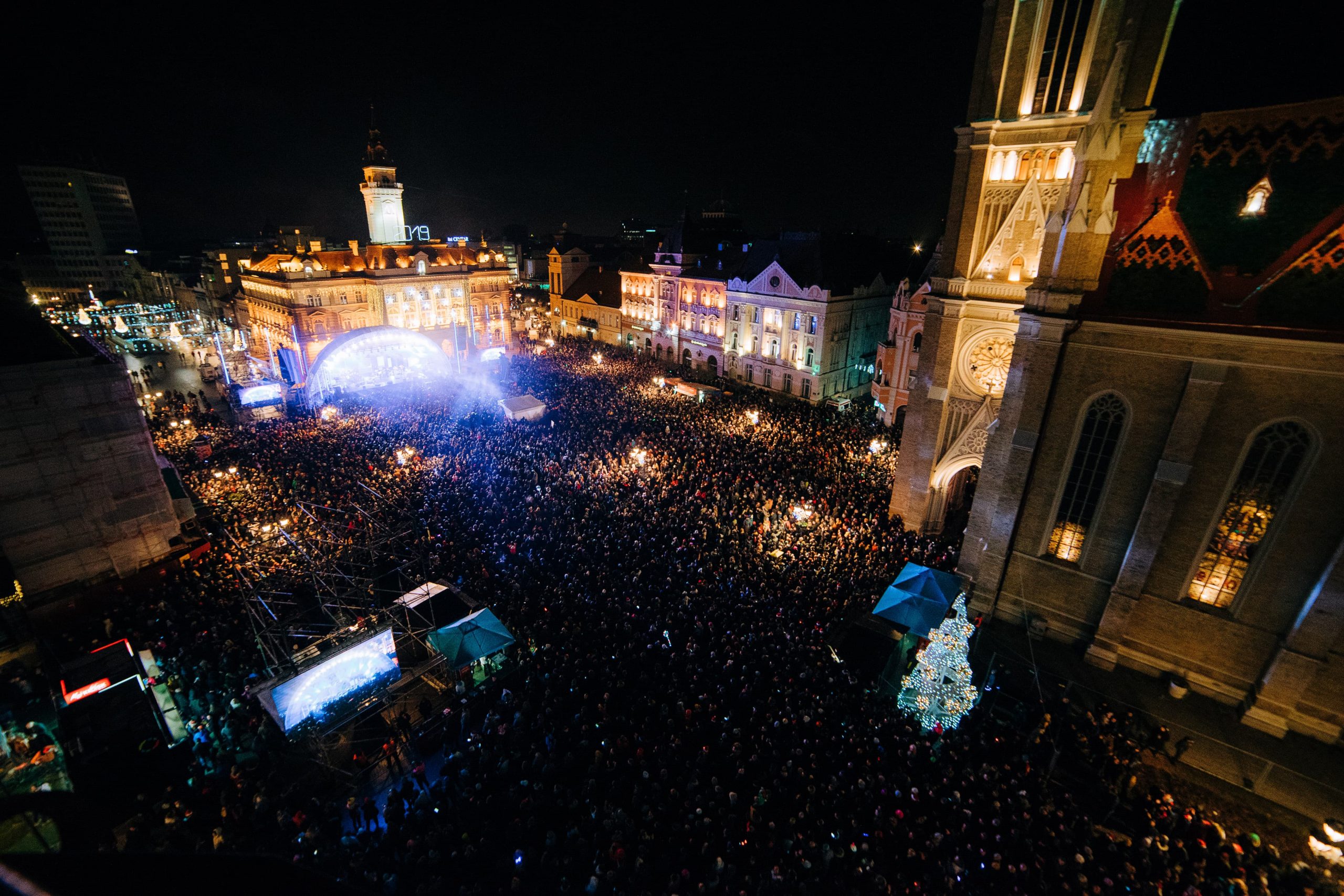 Doček in Novi Sad has proven that ‘diversity is our strength’. Whilst the New Year’s Eve was celebrated on 31 December during the day in the open space in the city centre, Doček 7527 was celebrated in the evening, only in closed spaces, and there was a high demand for tickets for almost 50 locations across the city.

From classical and spiritual music, to jazz and evergreen, reggae, pop, hard rock and punk, alternative and electronic music, a great variety of musical and artistic genres connected with numerous famous artists from the local and world music scene in order to display the glory of Novi Sad at another Doček that is unique in Europe.

The atmosphere in the Synagogue was very special and solemn, when Roman Simonović came to perform straight from the London Philharmonic Orchestra. The audience enjoyed an outstanding interpretation of works of Corelli, Barber, Golijov and Piazolla, while the ‘first violin of the London Symphony Orchestra’ together with ‘Camerata Academica’ string quartet from Novi Sad performed ‘Four Seasons’ by Astor Piazolla.

Fans of mixture of jazz, classical and Hungarian Romani music enthusiastically left the Serbian National Theatre after the extraordinary performance of Roby Lakatos. Bane Krstić and Garavi Sokak presented the sound of Vojvodina and celebrated 30 years of their successful career within the celebration of Doček in the oldest Serbian Theatre. 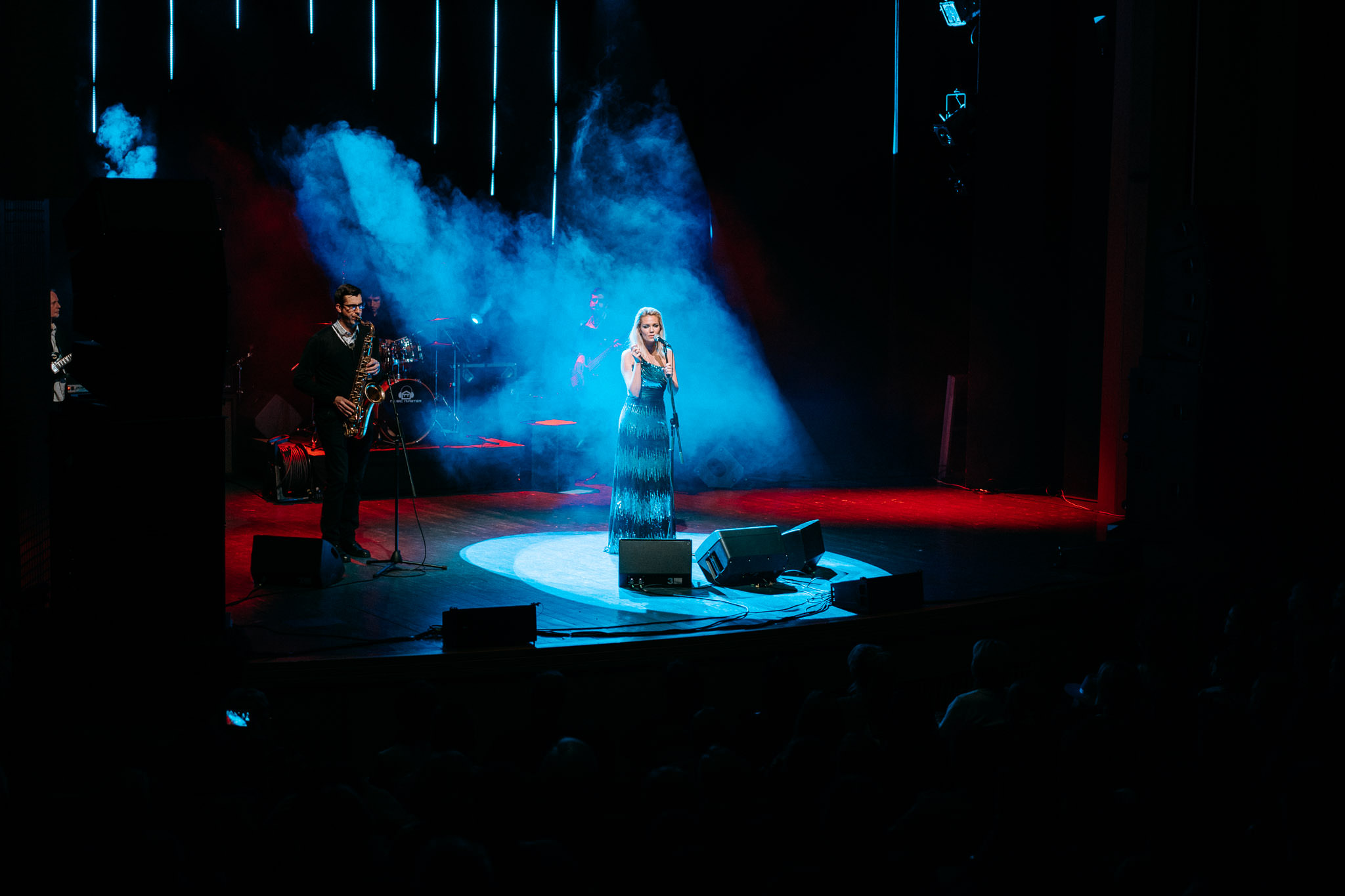 Lena Kovačević had a magnificent performance and audience in the Great Hall of NIS had a chance to listen to world famous voice of our famous diva. Besides Lena, Piotr Damasiewicz, artist from Poland and representative of jazz genre, performed within Doček 7527 in the intimate atmosphere of famous ‘Absolut’ club.

Diverse programme was organised for the youngest citizens of Novi Sad, who had a chance to see the ‘Baš Čelik’ opera for children based on the motifs from one of the most popular Serbian fairy tales. Children watched and listened the ‘Visoko C’ troupe with excitement, and Jovana Balašević, actress from Novi Sad, joined the performance. Special musical programme for children was prepared in Studio M, where young artists from ‘Kreativni M Kutak’, ‘Melodies’ School of Music and Nevena Stankov, student from the ‘Isidor Bajić’ Music School performed.

The Youth Theatre was not behind when it comes to diversity of the programme. As it was announced, this cultural institution was the real time machine, where Marilyn Monroe, the real temptress with beautiful voice and irresistibly charming woman, took the audience to 50s and 60s. Sanja Ilić and Balkanika showed how tradition and Serbian musical heritage is being fostered and they proved why they are truly one of the best in this musical genre.

Đorđe Miljenović did not have a break while singing his brutally realistic, honest and emotional songs in the Novi Sad Theatre, while the great ‘Erotizam’ concert of the Vrum group has shown how to break down the prejudice and how loud and clear art can be!

The Zemlja Gruva, band from Belgrade, created an amazing dancing atmosphere in the Svilara Cultural Station.

The Atomsko Sklonište, band from Croatia, did a phenomenal gig in the ‘Petőfi Sándor’ Hungarian Cultural Centre. Older generations were excited to hear the legends of their youth, while younger generations had a chance to see the retro analogue gig.

Punk-rock spectacle gathered fans of bands Partibrejkers, Ritam Nereda and Planet of Zeus in SPENS. The three-hour concert of hard sound, timeless hits, energetic performance and enthusiastic audience has proved that Novi Sad is still the city of punk, always in the mood for good gig and high-quality music.

Fierce women from the death metal band Nemesis, showed the strength and courage during their performance in the Shamrock Bar, while Sajsi MC and DJ BKO jointly brought the energy of strong women to the Gerila Bar, as well as representatives of the alternative scene – Sana Garić and Bitipatibi, band from Belgrade, whose performance took the audience to completely new dimension of enjoyment in the Cultural Centre of Novi Sad.

Some people enjoyed the programme of Doček while sitting, others did not stop dancing throughout the night, which was the case in the Studio M, where Del Arno reggae band and authentic MAiKA Serbian-Croatian-Montenegrin band performed.

Fans of electronic music also had a chance to enjoy the interweaving of creative work of two DJs in the Matica Srpska within the performance of Second Dream: Benjamin Fehr b2b Sloxxx and during the ‘Back to the Roots’ event in the Hall no. 4 of the Novi Sad Fair where world famous trance stars: live acts Etnika & Pleiadians (Italy/Spain), E-Mantra (Romania) and DJ Adept (Russia) performed. In addition to this, citizens of Novi Sad had a chance to hear Marko Milosavljević, a great representative of electronic sound, whose ‘local support’ were Teha and Melange in the Lab Cultural Centre.

Choirs of the University of Novi Sad and Orthodox Church of Saint George delighted audience with their performance of spiritual music in the Museum of Vojvodina within the performance entitled ‘Inad Istoka i Zapada’.

The music of the Beatles, Bob Dylan, Neil Young, Velvet Underground and other world famous stars was played in the Bulevar Books. People who decided to spend their night in the Bulevar Books, place known for good gigs, witnessed the performance of the Plavi Ptičić, one of the best cover bands in the region, who played hits by the legends and reminded audience of the beginnings of real rock ’n’ roll.

The audience in the American Corner experienced the real musical time travel with vocal-instrumental soloist Loran Prokopić, who, together with pianist and composer David Klem performed songs by Dean Martin, Elvis Presley and Frank Sinatra.

Nobody appeared to be indifferent to acrobatics of circus artists from Novi Sad, the so-called circus cabaret ‘Kabare Bre’, who performed with Aleksandar Dujin and band in the West Hall of SPENS. The performers of the ‘Ko se Boji Isadore Dankan’ musical directed by Gea Gojak managed to recreate dance charms in an extraordinary manner in the Gallery of Matica Srpska

Traditional arrangements of ‘Serboplov’ in the ‘Mladost’ Cultural Centre in Futog made audience ride the waves of folkloric creative work that was revived through new arrangements that people nowadays are more familiar with, while the film screening of ‘Boja Nara’, film by Sergei Parajanov enriched with the music by Nicolas Jaar, first-rate representative of electronic music, attracted fans of the film.

Doček 2019, which citizens of Novi Sad wholeheartedly celebrated, and Doček 7527 are future gala opening and closing of 2021, when Novi Sad will become European Capital of Culture.