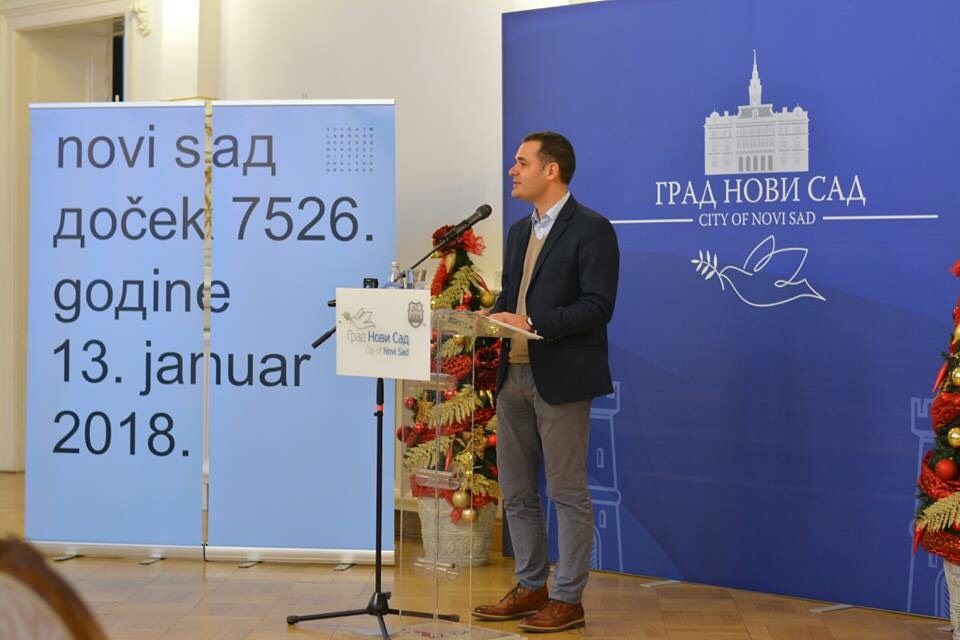 Celebration of the Year 7526 in Novi Sad

As an overture for 2021, when Novi Sad will be European Capital of Culture, the ‘Novi Sad 2021’ Foundation starts building capacities for two New Year’s Eve celebrations, as future Opening and Closing Ceremonies for the year of the title.

Represented through the difference in measuring time, as well as two calendars – Gregorian and Julian, these two programme concepts will also be different.

The celebration of the year 2018 will take place on 31 December during the entire day, mostly in open spaces and in the city centre, while the year 7526 will be celebrated only in the evening, only in closed space, and it will be spread across the city. What connects them? The interculturality bridge that intertwines parts of high aesthetics and pop culture, which brings new audience to high culture, while mass culture receives new standards and values, making it better.

Performers of various genres will perform in unexpected places – on more than 21 cult locations including cultural, administrative, business and educational buildings, as well as catering facilities. The bridges that will connect conceptually different performers, genres and spaces feature traditional music of a true virtuoso Slobodan Trkulja with Ímar band from Scotland on the ‘Pera Dobrnović’ stage of the Serbian National Theatre, spiritual music of Divna Ljubojević in the Ballroom of the NIS building, Laibach’s recognisable hard sound on the ‘Jovan Đorđević’ stage of the Serbian National Theatre, the famous regional star Kaliopi in the Youth Theatre, some of the renowned jazz artists from the region Matija Dedić and Zoran Predin in Novi Sad Synagogue, Children Philharmonic Orchestra in the City Hall, children’s opera of the Visoko C association in the Egység chateau, the incredible combination of tamburitza bands from Osijek and Novi Sad featuring Dušan Svilar in Studio M, circus Cabaret Bre performed by the Cirkoneo association in the West Hall of the SPENS, various cultural-artistic associations from the Zone 021 in the Hall of the Railway Station, while the future Youth Creative Polis, the so-called Chinese Quarter will host programmes on four locations for fans of techno sound and rap music, when Paul Rich from France, Lag, Klaus and Vladimir Aćić will perform in Fabrika, and Necone, Friday Swag, Janchezz, Rasheed and Yeah Left in the Quarter. This is just part of the programme that is being prepared for 13 January in Novi Sad during the celebration of the year 7526.

At the beginning of the year that is announced to be the European Year of Cultural Heritage, by celebrating two ways of measuring time and two calendars as part of both European and Serbian intangible cultural heritage, and by opening the programme to diverse genres and performers from Europe, the ‘Novi Sad 2021’ Foundation continues its work on achieving the set goals, which are internationalisation and decentralisation of culture with participation of citizens.

Nemanja Milenković, CEO of the ‘Novi Sad 2021’ Foundation said: ‘Starting today, Novi Sad will no longer be famous for its multiculturalism. Not only for its ethnic and confessional multiculturalism, but also for social and cultural. Starting today, Novi Sad lives interculturalism. Today, two shores that only exist across each other for the good part of the year, and are never truly connected, which can cause misunderstandings, will finally be connected by new bridges we build. We will start this connection through ‘Dve Nove’ New Year’s Eve celebration, to make this period of the year a reminder of the most important European values that can and should be embedded into the identity of Novi Sad. We would like to remind of spiritual values: faith, love and hope, as the soul of European, and not just European, civilisation, as well as of civil values: freedom, justice and equality, as foundations of modern Europe’.