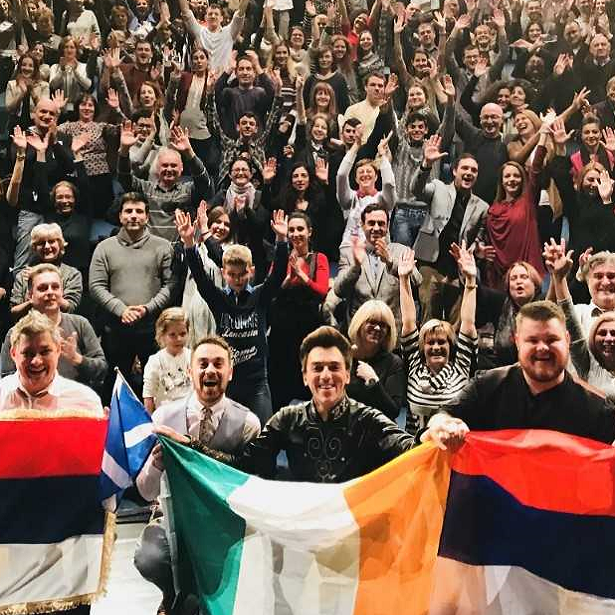 At the very beginning of 2018, Novi Sad presented itself as Serbian, regional and future European capital of culture.

By combining elements of high culture with pop and mass culture, discovering new locations, new buildings and performers, as well as by reminding of the existing ones, more than 60,000 people celebrated two New Year’s Eves in Novi Sad, on 31 December at 4 locations in the first staged celebration, and on 13 January at 38 locations with more than 150 performers.

Novi Sad, together with artists and performers from numerous European countries, as well as with the audience from the entire region, has confirmed that its itinerary for the European Capital of Culture title in 2021 is a successful one.

The big production endeavour, packed concert halls and museums, the most visited children’s opera so far, touching return of the Youth Philharmonic Orchestra in Novi Sad Synagogue, performances of famous artists from the region, as well as the young hopes of the local music scene, and never-before-seen atmosphere of Novi Sad have brought new energy to the city and hope that culture can be a way of life.

The new concept of the ‘Novi Sad 2021’ Foundation, performers at completely unexpected locations and strengths of the culture of Novi Sad open new doors, cooperation with cultural, educational institutions and creative industries, as well as great tourist potential of the new brand, celebration of two New Year’s Eves in Novi Sad.

Citizens of Novi Sad and numerous guests from the region and Europe entered the new year with the sounds of Darko Rundek, Plavi Orkestar, S.A.R.S., John Acquaviva, Krešo Bengalka and many others on 31 December, while on 13 January they witnessed the richest programme in the history of Novi Sad.

The fact that the tickets for the celebration of the year 7526 were sold out in record speed and that numerous free programmes were packed confirm that people are eager for cultural events and new concepts.

As an overture for 2021, when Novi Sad will hold the European Capital of Culture title, the ‘Novi Sad 2021’ Foundation starts building capacities for two New Year’s Eve celebrations, as future Opening and Closing Ceremonies for the year of the title.

Represented through the difference in measuring time, as well as two calendars – Gregorian and Julian, these two programme concepts will also be different.

Our fellow citizen, multi-instrumentalist Slobodan Trkulja, and Scottish-Irish band Ímar delivered the best music event on the eve of the Doček and brought everyone to their feet.

Citizens of Novi Sad have spent the midnight with conceptual sound and authentic stage-music event of Laibach band and their creation ‘Thus Spoke Zarathustra’, while Zoran Predin and Matija Dedić evoked fond memories on the music hits from Ex-Yugoslavia with new arrangements and production.

In Studio M, Dušan Svilar with tamburitza orchestras from Osijek and Novi Sad created a fantastic atmosphere within the first cultural project between Novi Sad and Osijek, which was city-candidate for Croatian European Capital of Cutlure in 2020, and it was a privilege to listen to Divna Ljubojević and Kaliopi.

Nikola Vranjković presented his new original music and lyrics in packed Novi Sad Theatre / Újvidéki Színház, visitors of the Gerila bar enjoyed with Marčelo, while the Peaceful Warriors performed in Startit Centre, Sara Renar and Ana Ćurčin in the Cultural Centre of Novi Sad, and Josip A Lisac and Dojo in Dom B-612.

The great atmosphere filled the Gallery of Matica Srpska with experimental sounds of the Bloom group, the hall of the Railway Station hosted the performance of cultural-artistic associations, while the West Hall of Spens features acrobatics that attracted audience of all ages.

Parties dedicated to electronic, rap and, drum and bass music in the space of the new Youth Creative Polis, ‘Fabrika’ Student Cultural Centre, Firchie Think Thank studio and Quarter, lasted up until early hours with famous names of local and European DJ scene.

The ‘Novi Sad 2021’ Foundation, as an organiser, made considerable effort, while simultaneously creating an opportunity for many young people to demonstrate their art – not only as performers or authors, but also as workers in production, managers and hosts.

The strong cultural dimension, events that make Novi Sad recognisable and different, as well as opportunities created for young people, and creation of cultural bridges, are the true legacy of the work of the ‘Novi Sad 2021’ Foundation on its way to the European Capital of Culture title.